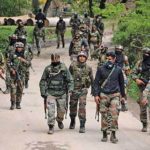 Three militants have been killled in a gunfight at Brinjal forest area of Vilgam, Handwara in north Kashmir’s Kupwara district on Friday, army said.

Army officials said that the soldiers of 15 RR intercepted a group of militants believed to be infiltrators at Brinjal forest around 7 kilometres away from Tehsil headquarter Vilgam.

“The group of militants opened fire upon the forces which retaliated and it triggered gunfight,” he said.

“The militants fired indiscriminately and in the gunfight that ensued, three infiltrators were gunned down,” he said.

However, their identity is being ascertained.