Pathwari’s “press for their resolution”, continues to strike on 5th straight day 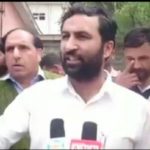 The indefinite pen down strike of Pathwari’s has entered to the fifth day on Wednesday. They have staged protest demonstration across the state to “press for resolution” of their long-pending demands.

Under the banner of All J&K Patwar Association, they raised slogans and threatened to intensify the protests in case the government didn’t meet their demands.

While holding the demonstrational protests across the state they have warned the government of more “intense protests” if their demands are not considered.

People who needed revenue documents and other information related to land deals were disappointed and feared losses.

Secretary Pathwar Association Khan Jahangeer while talking to Kashmir Press said the protests “are being held across the state to get the attention of the government towards our long pending genuine demands.

“We have time and again taken up our grievances and demands with the government. Despite assurances and promises, nothing was done on ground,” he said.

“We also demand abolition of direct recruitment of NTs. The department has hundreds of experienced PSC qualified Girdawars who can take up the job effectively and with almost no burden on state exchequer,” he added.

“We demand that DPC may be convened at an earliest to provide justice to the aggrieved, as the non-conducting of timely DPCs results in stagnation and violation of rights of our community.” he added.

“As of now none of our demand has been redressed; whether it would have been the demand of Grade pay of graduate Pathwaries, creation of GQ circles, establishing Pathwari Halqas, or the abolition of direct recruitment of naib tehsildar’s, none have been redressed till date”.

“Pertinently, a committee has been constituted by the government vide no 170-REV-NG dated 1-07-2017 and has agreed our “demands as genuine” and recommend the same for approval. But till date nothing has been done,” Khan added.

“So the patience of the pathwar fraternity has reached beyond the limits and we have been forced to call for strike and come on roads to press our demands,” he said adding, “we don’t want public to suffer but we are being forced to go on strike, with demands are not being fulfilled”.