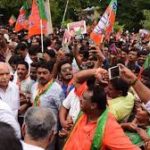 Leaders of both Congress and Janata Dal (Secular) along with the newly elected members of the Karnataka Assembly on Thursday held a symbolic protest in front of Gandhi statue in the Vidhana Soudh against Governor Vajubhai Vala.

After nearly four hours of protest the Congress legislators returned to Eagleton Resort on the outskirts of the City, while JDS legislators went back to a five star hotel in the city.

Leaders of both Congress and JD-S will hold a meeting to chalkout future course of action according to sources in the Congress.

Mr Kumaraswamy appealed cooperation of political leaders of various political parties to protest against onslaught of democracy and uphold the constitution of the country. “I am writing to opposition leaders of various States, political leaders including West Bengal Chief Minister Mamata Banerjee, former Uttara Pradesh Chief Minister and Bahujan Samajawadi Party (BSP) head Mayawati and others to protest severely and come to uphold the values of the Constitution,” he added.

Mr Kumaraswamy alleged that according to information received by him the Modi government was threatening Congress MLA Anand Singh with raid by Enforcement Directorate if he supports his party Congress in formation of the Government. “Though Anand Singh was elected on Congress ticket, he was threatened not to support that party otherwise face action from ED,” he added.

The two parties had met the Governor on Wednesday and sought him to invite them to form the government as they were numerically strong with 117 members as against 104 of the BJP. They feared that the BJP might resume the operation lotus to woo members of both the Congress and the JD(S) to muster the requisite numbers. Mr Kumaraswamy had even indicated that the offer made by the BJP was Rs,100 crore for each member along with a cabinet berth. “(UNI)