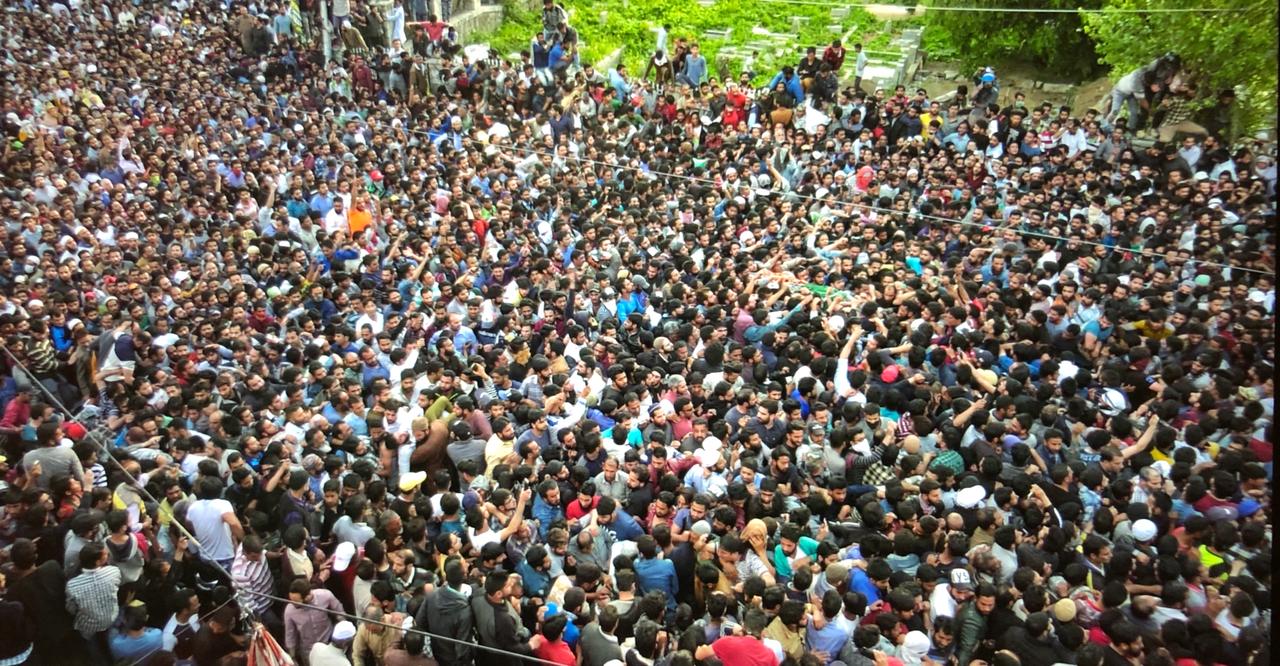 Tens of Thousands of people attended the last journey of militant Fayaz Hamas who was killed at Chattabal, Srinagar, along with his two accomplices

Tens of thousands of people converged in old city and marched with the body of slain lashkar-e-Toiba militant, Fayaz Ahmad Hamal, to offer funeral prayers.

After the encounter ended with the killing of three militants, the police identified one of the militant as Fayaz Hamal of Dukan Sangin, Khanqah.

“Only one militant could be identified,” police sources said. “The identification of other two militants is yet to be ascertained”.

Fayaz used to run press and joined militancy in the year 2017. He was mostly active in Kulgam Shopian belt.

Soon after the news of the killing of Hamal spread in the surrounding areas, tens of thousands of people converged towards old city and started raising pro-freedom and pro-Pakistan slogans.

The people including men, women children and old were present in the massive gathering. The anger was visible. Amid the vociferous sloganeering, the women were singing dirges for the slain militant.

The rush of the people was such that there seemed to be no end to the stream of the crowd. Some of the participants were walking barefoot, some with one shoes only  due to the extreme rush of people and as such fear of getting mowed to death.

“I have never seen such a mammoth crowd in years together,” a participant, Iqbal Ahmad said. “We are angry. But, it is a collective solidarity with the people. We want freedom for Kashmir. We will get. The sacrifices will not go waste”

The body of Fayaz was kept in a truck and paraded around. Tens of thousands of people followed it. The body was taken to Jamia Masjid where the people paid tributes to him.

The funeral prayers of Fayaz were held at Jamia masjid. Later he was taken to the Iddgah for burial.

Breaking from the tradition, the authorities have made no deployment. The march and the protests remained peaceful till the last reports came in.

According to the reports government forces cordoned off Chattabal area on Friday night. During the search operation, the forces came in contact with the militants, triggering an exchange of gunfire.

The fire fight ended with the killing of three militants including Fayaz Ahmad Hamal. An assistant commandant of CRPF also sustained injuries.

As the encounter was underway, youth clashed with police. During the protests, a police vehicle mowed boy at Safakadal.

Soon after the incident, a video went viral in which it was clearly seen how a bullet proof vehicle of the police mows a youth to death in Safakadal area.

The boy, identified as Adil Ahmad, was rushed to SMHS hospital. However, he was declared dead. His body was later forcibly taken by the police under their possession.

As the video of the incident went viral, police said that an FIR has been lodged at police station Safakadal and the vehicle driver involved will be identified and a action will be taken.

Inspector General of Police Kashmir Zone Mr SP Pani Saturday said that they will definitely take action against the vehicle driver who run over a protesters in Srinagar during clashes.

“We have taken cognisance of the video. We are ascertaining the facts and investigating the matter and action will follow,” he said to local news gathering agency CNS.